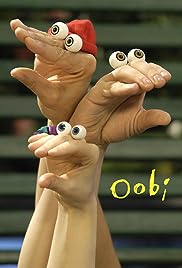 2:01 | Trailer
6 VIDEOS | 62 IMAGES
The everyday discoveries of a curious young hand puppet named Oobi. He and his family have funny, simple adventures that celebrate the awkward steps of growing up.

Oobi, Uma, Kako and Angus dress up in costumes and perform a musical version of "Little Red Riding Hood," directed by Maestru.

Uma is able to use her imagination to transform a nightmare into a nice dream.

Everything New on Disney+ in May

Disney+ is bringing some exciting new movies and series to their catalog of classics! Check out what's streaming this month.

Nick Jr
a list of 32 titles
created 11 months ago

Search for "Oobi" on Amazon.com

When a person is alone, there are many emotions that start running off in his mind. This film is a psychological thriller that captures these emotions of a different kind. When a person is silent, the mind is making a lot of sound.

A young girl with some extra weight is helped by her guardian angel / favorite singer Anastacia to change her perspective on life. She will progressively acquire self-confidence, modify her... See full summary »

The Upside Down Show (AKA Down Upside), Shane Dundas and David Collins play brothers who live together in a strange house with a variety of unusual rooms.

A story of a blue octopus and his dog that looks like a hotdog, named Weenie, and their friends like Daisy the daisy, and Henry the penguin. They go on adventures in their town that usually... See full summary »

Based upon a series of children's books, a grizzly cub has many misadventures with his friends.

A smart, inquisitive five year old boy called "Little Bill" explores what life is like with the help of his big imagination.

Live-action and animation blend together in this educational fantasy about a family of lions running a library filled with adventurous and musical books.

Olie, his sister Zowie, and his best friend Billy live as robots and discover the values of friendship, family, and growing up to be a great kid.

Bear lives in a Big Blue House with several of his muppet friends: Treelo the lemur, Ojo the bear cub, Tutter the mouse, and Pip and Pop the otters. Every day bear uses his reassuringly ... See full summary »

Franklin focuses on the eponymous growing young turtle who, as his television stories and books always begin, "could count by twos and tie his shoes".

From the writers and puppeteers of "Sesame Street" comes this series about wonder and imagination. It focuses on the stage in a young child's life when everything in his or her world is new and incredible - when each revelation helps build a sense of mastery and self-confidence. A bare hand puppet named Oobi is the star of the show. Each day, he learns more about the world around him. Joining him on his adventures are Uma, Kako and Grampu. Episodes are organized around simple themes such as animals, food, water, music, art, play and nature.

The friend who's always with you!

Reruns of the original shorts stopped airing in 2007 when Noggin ended its relationship with Sesame Workshop. Since the shorts were created when all of the channel's programs were co-productions of Nickelodeon and the Workshop, it is unknown which company has the broadcast rights for them. See more »

During the closing credits, the kids from some episodes appear playing with their eye goggles. The little girl smiles / waves to the viewers at the end See more »

I hesitated to let my sons watch Oobi for the longest time because of the basic speech involved. However, my oldest son has Pervastive Developmental Disorder (broad spectrum autism) and a speech delay. Watching Oobi has expanded his vocabulary tenfold. He can recite entire scenes now, and is learning to put words together. It works for him because it takes out articles, contractions and superfluous words and gets down to the basic words needed to convey meaning. The "extra" words were bogging down his understanding. So, while I agree that the speech in Oobi isn't good for toddlers who are talking at or above age level, for those struggling to learn, it could be a valuable tool!

In addition, the show is DARLING! Even the adults in my house love to watch it! You actually forget while you're watching it that they're just HANDS with plastic eyeballs! The episode when the kids put on a production of Little Red Riding Hood is SO entertaining. It's even taught my kids to start singing!

Q: Are Oobi and Kako gay?
Q: Is the show a spin-off of Sesame Street?
Q: Where are Oobi and Uma's parents?
See more »
Edit

A League of Their Own
Airplane!
The NeverEnding Story
Little Women
Midnight in Paris