TV-MA | 43min | Drama, Mystery, Thriller | TV Series (2020– )
Episode Guide
10 episodes
2:09 | Trailer
5 VIDEOS | 98 IMAGES
When a CIA officer investigates a man attracting international attention and followers through acts of public disruption, she embarks on a global, high-stakes mission to uncover whether he is a divine entity or a deceptive con artist.

The Wages of Sin

Eva scrambles to thwart a plan designed to silence al-Masih, while breaking news causes dismay among his followers.

We Will Not All Sleep

Jibril has a striking vision in the desert. Eva finally gets hard intel on al-Masih, whose devotees form a convoy to follow him out of Texas.

Eva unearths alarming details about al-Masih's past. Jibril's and Samer's paths unexpectedly collide. Rebecca steps up at a crucial moment.

January Picks: The Movies and TV Shows You Can't Miss
a list of 16 images
updated 1 week ago

How Much Have You Seen?

How many episodes of Messiah have you seen?

Search for "Messiah" on Amazon.com

This Long-Haired Man of Miracles Has Our Attention 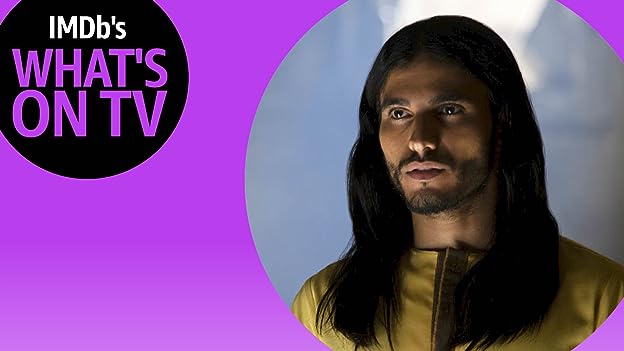 The new Netflix series "Messiah" with Michelle Monaghan is attracting some followers and earns a place on our list of must-watch shows streaming this week.

Eva scrambles to thwart a plan designed to silence al-Masih, while breaking news causes dismay among his followers.

A dangerously charming, intensely obsessive young man goes to extreme measures to insert himself into the lives of those he is transfixed by.

Nine noble families fight for control over the mythical lands of Westeros, while an ancient enemy returns after being dormant for thousands of years.

In 1897 Transylvania, the blood-drinking Count draws his plans against Victorian London.

Geralt of Rivia, a solitary monster hunter, struggles to find his place in a world where people often prove more wicked than beasts.

Vikings transports us to the brutal and mysterious world of Ragnar Lothbrok, a Viking warrior and farmer who yearns to explore - and raid - the distant shores across the ocean.

Follows the political rivalries and romance of Queen Elizabeth II's reign and the events that shaped the second half of the twentieth century.

A gangster family epic set in 1919 Birmingham, England; centered on a gang who sew razor blades in the peaks of their caps, and their fierce boss Tommy Shelby.

The travels of a lone bounty hunter in the outer reaches of the galaxy, far from the authority of the New Republic.

When a young boy disappears, his mother, a police chief and his friends must confront terrifying supernatural forces in order to get him back.

Sheriff Deputy Rick Grimes wakes up from a coma to learn the world is in ruins, and must lead a group of survivors to stay alive.

In April 1986, an explosion at the Chernobyl nuclear power plant in the Union of Soviet Socialist Republics becomes one of the world's worst man-made catastrophes.

Messiah explores the lines among religion, faith and politics. It chronicles the modern world's reaction to a man who first appears in the Middle East creating a groundswell of followers around him claiming he is the Messiah. Is he sent from God or is he a dangerous fraud bent on dismantling the world's geopolitical order? The story unfolds from multiple points of view, including a young CIA agent, an Israeli Shin Bet officer, a Latino preacher and his Texan daughter, a Palestinian refugee and the media, among others. Written by ahmetkozan

Will He Convert You?

Everyone in the cast was deathly afraid of spiders, so multiple types were brought on set when fear was the desired emotion for the actors. See more »

Q: Is this based even loosely on "Stranger In A Strange Land"
See more »

its bingeable, interesting its a fiction but i like the idea , ask yourself what if jesus comes during these times..messiah took it to the next level
2 January 2020 | by johnpebenito – See all my reviews

Ask yourself what if jesus comes during these times..messiah took it to the next level, its a smart tv series by letting people decide if he is true or not, by letting viewers decide if he is a hoax or the truth, and love the idea that he doesnt come in a specific religion he always say i walk with everyone , so no religion affiliation when it comes to al mesi, however the tv series looks expensive location shooting and all and authenthic , israelites speaks hewbrew, arabic countries speaks arabic i love it , it looks authenthic , its bingeable , not perfect but really is interesting, again this is a fictional tv series i hope we get a seaSON 2, im atheist but i enjoyed it ...